How do native Polish speakers identify and classify the British English monophthongs?

The listeners’ native language for this L2 listening task is Polish. Concisely, Polish is a West Slavonic language used in Poland. It contains a rich and heavy-cluster consonant system and a simple six vowel system. The lax vowel system consists of three high vowels [/i/-/i/-/u/] and three low vowels [/e/-/a/-/o/] (Jazeem, 2003: 1-3), as shown in Figure 1, where English monophthongs are shown for contrast. Polish is considered as a transparent language where the relationship between graphemes and phonemes is almost one-to-one, as it is in Spanish (Escudero & Wanrooij, 2010: 349). Vowel duration is not a contrastive feature in Polish. 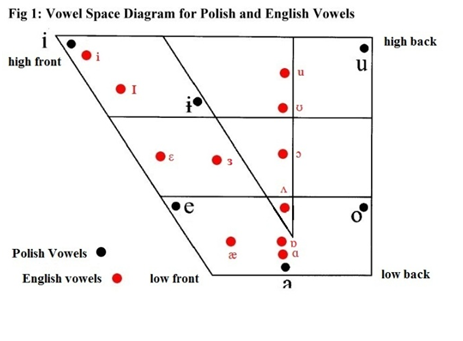 There exists limited research on the perception of British English monophthongs by Polish speakers. Bogacka (2004) has conducted a perception experiment on /i/-/ɪ/ and /u/-/ʊ/ monophthong contrasts in 27 Polish high-school speakers. She concluded that they were able to distinguish correctly between /i/ and /ɪ/ contrasts, but were unable to distinguish /u/ and /ʊ/ contrasts due to orthographic interference and L1 reading habits. Bogacka (2004) also found that Polish speakers used spectral cues in the /i/-/ɪ/ contrast, and temporal cues in the /u/-/ʊ/ contrast.

The motivation of this study is to bridge the existing gap in research on the perception of English monophthongs by Polish speakers. Furthermore, as differences between Polish and English vowels exist in terms of total numbers and articulation differences, findings may show a complex language perception pattern that includes a combination of single and multiple category assimilations, as stated in Escudero’s (2005) Second language linguistic perception (L2LP) model.  Moreover, results may include other L1 perceptual interferences that impede L2 acquisition and need further addressing. The results of this L2 task can provide salient information for ESL designers and teachers whose target audiences are native Polish speakers or other languages with characteristics similar to the Polish language.

Eleven British English (/i/-/ɪ/-/ε/-/æ/-/ɑ/-/ɒ/-/u/-/ɔ/-/ʊ/-/ʌ/-/ɜ/) are used in this L2 listening task. The monophthongs are synthesized by the Pratt software to simulate height and backness auditory characteristics of the English vowels, and are of equal length (Escudero & Chladkova, 2010). These monophthongs are repeated ten time for a total of one hundred and ten tokens.

Three native Polish speakers (2 females and 1 male) will participate in the experiment which will take place in a quiet room. All speakers migrated to Australia in their mid 30’s, and have been in Australia for longer than 10 years. They have never taken English classes or have been exposed to English prior to arrival in Australia. None of the listeners had previously lived in countries where British or American dialects are used, and only been exposed to British English dialects in Australia via standard media. All listeners had reported difficulty with English during their initial stages of acquisition and still did not feel confident with their level of English. For a control group, one Australian native speaker will be included in the experiment to compare results to the Polish speakers.

Using a standard computer and headphones, listeners are asked to identify incoming auditory stimuli and classify them according to twelve orthographically represented English words shown on the screen (eat, it, pull, pool, hair, bed, bird, ball, had, hot, had and hut). The listeners will be familiarised with the meaning of these words, and instructed to select one category, even when uncertain. They can proceed at own pace, and the duration of the experiment is expected to be less than 20 minutes. Their responses are collected by the Praat software for further analysis.

It is predicted that Polish speakers will only differentiate between some of the English monophthongs and will identify some monophthongs correctly, as stated in PAM, PAM-L2, L2LP, and Bogacka (2004).  Furthermore, as the Polish monophthongs inventory is smaller than that of English, it is further predicted that multiple and single category assimilation will occur, in line with Escudero & Chladkova (2010).  More specifically, the majority of the listeners may perceive the /i/-/ɪ/ contrast correctly, the /u/-/ʊ/ contrast may be perceived as the single /u/, due to L1 language transparency/reading habits, in line with Bogacka (2004: 5-6),  and Escudero & Chladkova, (2010).  The /æ/-/ɑ/-/ɒ/ vowels may be perceived as a single /ɑ/ vowel, and /æ/ may be perceived as either /ɑ/ or /ε/, as Fig 1 shows /æ/ is located between to the Polish /e/ and/ a/ causing perception difficulties predicted by the SLM. The /ε/ and /ɔ/ monophthongs may be perceived as /e/ and /ɑ/, in line with the second language linguistic perception (L2LP) model in Escudero & Chladkova (2010) and due to L1 reading habits/language transparency. It is further predicted that L1 reading habits/language transparency/orthographic interference may affect the participants responses for the following monophthongs /i/, /ʊ/, /ɜ/, and /ɔ/. The table 1 below shows predicted responses for majority of listeners.

These findings will answer the research question by demonstrating how Polish speakers identify and contrast English monophthongs. 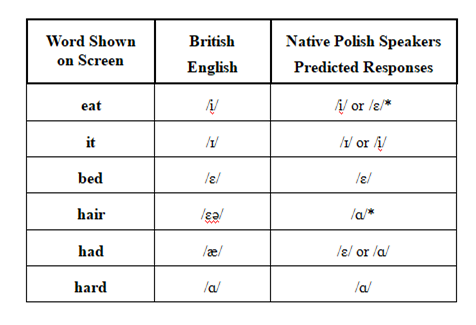 Bogacka, A. (2004). On the perception of English vowels by Polish learners of English. Poznań, Poland: Adam Mickiewich University.