Nihilism and Its Effects

“Nihilism is a disease of the soul.”

Nihilism, from a Latin “nihil” meaning nothing, is the belief that all values are untrue and that nothing can be learned or communicated. One can be a nihilist just about anything. For example, a philosopher who does not believe in the existence of knowledge is called an “epistemological nihilist.” An atheist can be called a “religious nihilist.” The history of nihilism started in Russia in the 1860s, causing suffocation all over the place. The majority of the population were breaking under their new liberty (to make payments to their former lords by decree of the Czar) or choking under the fallacy and conservatism of the Conventional Church. Russia having proven itself among the great empires of Europe after the defeat of Napoleon, it also found itself an intellectual backwater.

The democratic unrest that had a great effect on the Continent had little consequence in Russia. Even Czar Alexander II’s dramatic move of releasing the serfs was more driven by his romantic sensibility after having read Turgenev’s urge to transform Russian society. As a consequence of this environment, historical nihilism incorporated positions that we could largely understand as unreasonable rather than as intentional. Given how short the life period of the historic nihilist period was (spanning both the introductory and

revolutionary period), it is hard to envisage what the consequence of an arduous universal skepticism would have been if it had the time to improve and transform. If philosophy is the practice of digging the earth, then it is no wonder that most philosophers spend their time wandering upturned soil searching for lost seeds and replanting. If nihilism was the political philosophy of skepticism in a time when society was mounted by the Orthodox Church and Czarist administration, it’s no wonder that it left little room for tradition. If the Church represented spiritualism, fallacy and sentimentality, then a philosophy for the modern time would have to discard all of these things. If the Czar represented the ossified despotic bigotry of a monarchy, then freedom would have to be the progressive, democratic republicanism of France, which is the limitation of parochial skepticism.

Nihilism, often linked with extreme pessimism and a radical skepticism that condemns existence. A real nihilist would believe in nothing, have no loyalties, no purpose other than a desire to destroy as seen in recent ‘cancel culture’ narratives.

Although few philosophers would claim to be nihilists, nihilism is mostly associated with Friedrich Nietzsche, who argued that its destructive effects would ultimately destroy all moral, religious and metaphysical convictions which will precipitate the greatest calamity in the history of man.

In the 20th century, nihilistic themes (moral failure, value destruction, and cosmic purposelessness) have preoccupied entertainers, social criticizers and philosophers. Mid-century, for instance, the existentialists helped popularize creeds of nihilism in their attempts to unsharpened its destructive potential and by the end of the century, the response to nihilism gave way to an attitude of insignificance, often associated with anti-foundationalism. 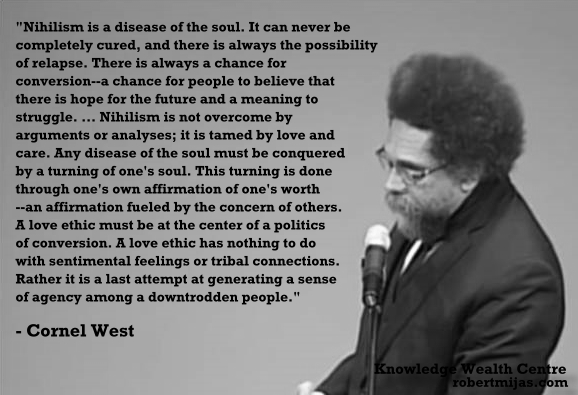 The scholar, Cornel West, has stated that nihilism is a disease of the soul and cannot be completely cured and a love ethic is highly recommended as a solution.