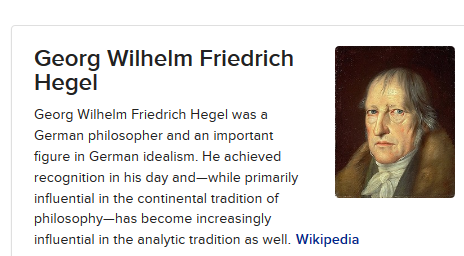 part of his philosophy over 200 years ago. His philosophy posits that human nature is related to the human spirit or the geist (Magee, 2010), and is based on wholeness and absolute determination via self-awareness and self-knowledge.

Hegel further proposes that the objective of existence is to become conscious of itself. Through constant change and ideological conflict, mankind procures an optimal state of spiritual consciousness by merging opposing ideologies. Even though the present version of the Hegelian dialectic is different from Hegel’s original version, the original concepts are maintained.

The three fundamental stages of Hegel’s dialectic are defined as the formulation of a thesis, an antithesis and the overall resolution between the conflicting sides merging into a synthesis (Magee, 2010). 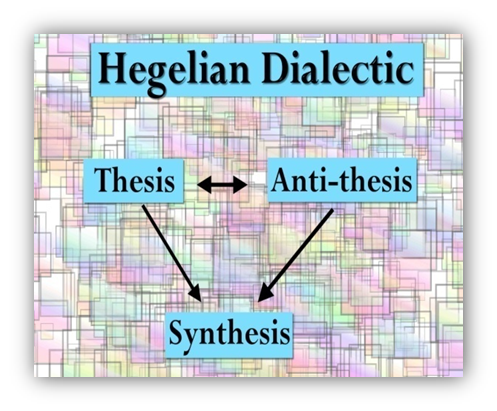 For clarification purposes, let’s pretend a Hegelian dialectic example of a smoker and a non-smoker. The smoker can formulate his or her thesis statement by presenting the fact that the consumption of tobacco is not dangerous or life-threatening. Secondly, we have the anti-thesis stage where the non-smoker holds the belief that tobacco does cause harm with supporting evidence to back this claim. The disagreement between both parties presents the next stage of the dialectic, the synthesis stage. During the synthesis stage, the resolution of the disagreement is achieved where the opposing sides reconcile their common beliefs and truths, engaging in a process to come to an agreement where both sides can then form a new proposition based on the disagreement.

Following our smoker and non-smoker example, the synthesis can be achieved by both of them supporting the conclusion that if smoking is restricted to certain areas in the public places, the harmful side effects of passive smoking can be reduced while providing a reduced degree of freedom to the smoker.

Characterized as the dialectic of self-consciousness (Gadamer, 1976), a problem-reaction-solution paradigm or a method used in Marxism (McKenna, 2011), the Hegelian dialectic has been accused of advancing agendas by emasculating and merging sovereign states or nations under a universal objective to centralize powers of world’s resources. It has been criticized for being used as a tool to promote a circular pattern of thought and action where taking sides is encouraged, usually from two options only. This raises validity and logical issues, well documented in false dichotomy, considered as a fallacy by many philosophers.

The Hegelian dialectic has been employed in numerous political, religious, or environmental contexts, where two opposing parties are guided onto a common ground with a new set of conflicts, via dialogues, consensus, pressure or less-known but effective false flag techniques. False-flag techniques are used in counter-insurgency, where a problem is falsely created and then blamed on the enemy in order to advance an agenda and arrive at some predetermined solution.

Moreover, a disturbing observation by Magee (2010) is that Hegel’s philosophy is difficult to dispute and is extraordinarily clever. It has been used to justify and normalise both moral and immoral acts for a greater good, through perpetual conflict and endless wars. Eric Voegelin (as cited in Magee, 2010) states that when you enter into an argument, you feel seduced and lost by Hegel’s logic. To break its spell, it is recommended to step outside Hegel’s dialectic limitations of controlled, guided, and false dichotomy thinking.

Irrespective of one’s point of view, the evolved version of the Hegelian dialectic has attracted proponents and critics. It has been used to engage, encourage, engulf, and eliminate opposing individuals/states to resolve their conflicting issues.

This entry was posted in Books, Headlines, Ponerology and tagged Dialectic, Hegelian, manipulation. Bookmark the permalink.