Panopticon and Its Implications

A Panopticon is a historic type of institutional building that was designed and elaborated by Jeremy Bentham, who was a prominent social theorist in the 18th century. The building itself is a multi-functional form of organization that surveilles individuals within its’ boundaries. Historically the concept has been linked to prisons, but it could be implemented in hospitals, government buildings or schools. Its multi-functional form has been carefully analyzed to allow a central all-seeing eye to monitor all occupants at any given time by inducing an overall permanent uncertainty in the occupants’ minds, irrespectively whether they are being monitored.

– Kevin Haggerty, Tear Down the Walls.

The design of the panoptic prison is very plain and simple. It consists of a circular rotunda institutional building where all inmate cells are stacked on top of each other in small cells in consecutive rows and columns all over the circular perimeter of the institutional building. The central watchman has his own tower at the center of the building with a considerable distance between the cells columns, allowing the guard to watch all inmate cells from at a distance at any given time without any kind of barrier whatsoever.

Bentley argued that this design has an automatic and homogenous effect of power that serves as an effective and efficient disciplinary mechanism to which individuals continuously conform.  He further stated that panoptic institutions could be so light that there would be no need for more bars, chains, or locks thus effectively producing significant improvements at minimum additional costs. 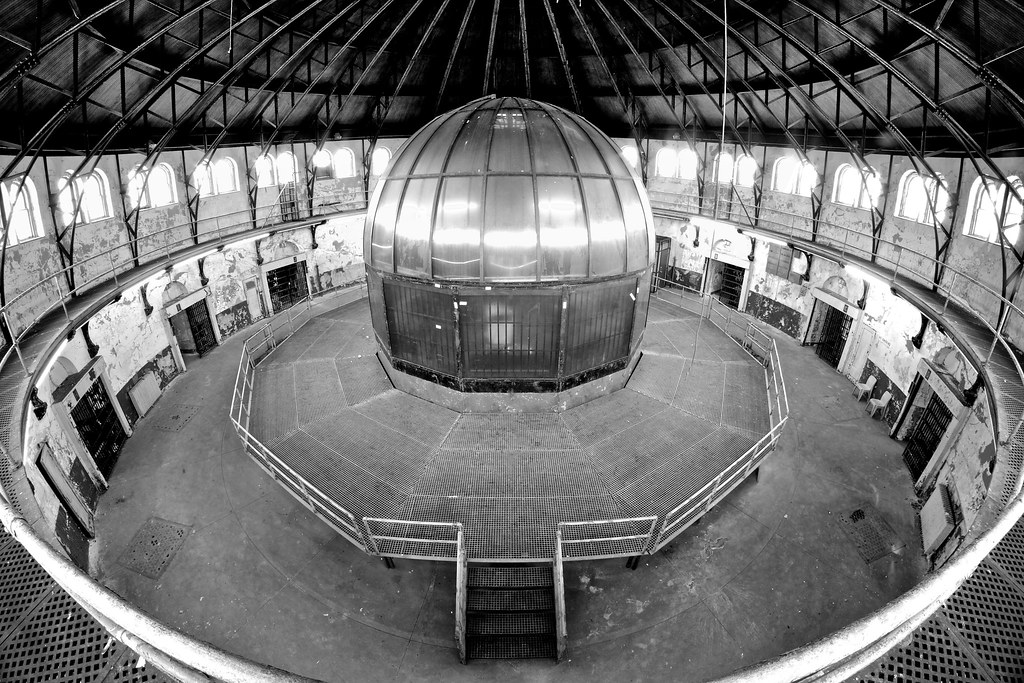 Panoptic underlying concepts have appeared in today’s mass surveillance, modern bureaucratic and data collection systems. While some argue that a degree of this type of surveillance technology may be necessary as a preventive method, a panoptic approach toward surveillance has been strongly criticized as an undemocratic, cruel and inhumane method by liberty organizations, as it undermines a democratic society which is built on transparency and accountability.

A panoptic system turns everyone into a suspect, and thus reverses the presumption of innocence into guilty until proven innocent. The Orwellian double-speak of constantly increasing security at the expense of privacy has been shown to reduce street robberies in London by only 3%, despite the fact that the usage of CCTV cameras in Britain is more common than any other country in Europe (Source: http://www.theguardian.com/uk/2008/may/06/ukcrime1).

Privacy advocates have created groups and organizations to prevent constant supervision and eradicate the invasion and violation of privacy in all forms. The aim of privacy is not to protect those who would commit a crime, but instead make it illegal to interfere with those who are practising their freedoms. Furthermore, punishing law-abiding citizens for the ills of non law-abiding citizens is a form of collective punishment and thus illegal under the UN.

Further research would be highly recommended to investigate the health implication of constantly living under the Panopticon’s behaviour-modification, social engineering conditions where opponents may want to ultimately ask who is actually watching the one watching.

This entry was posted in Headlines, Ponerology and tagged monitor, panopticon, surveillance. Bookmark the permalink.