Hedonism and Its Impact on Society 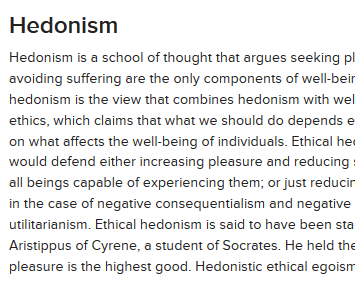 Achieving a pleasurable well-being within our body and within our state of mind is probably one of the most essential necessities that every human being strives to achieve on a constant basis; from all, each human being is constantly faced with the societal pressure to achieve a remarkable degree of pleasure from all sorts of life experiences in the most rapid, efficient and painless way as possible, to the point where this form of accumulation of wants and desires gets to an unbalance between what can be achieved and cannot be achieved in the long term.

Hedonism by its sense has been analysed and critically interpreted as human behaviour that optimizes the search for pleasurable activities that add an aggregated value to one’s own life and diminishes all potential pains, discomforts, suffering and inconvenience; supporters agree that life happens only once and it is important to always be hedonistic to optimize and take the most out of life in the long term; opponents on the other hand severely question the negative effects that hedonistic views and practices have on society as a profound impact not only within cultures, people, ways of thinking, but also in the perceived dangers indirectly linked to human development, societal changes and even economic growth.

One of the most popular forms of hedonistic activities practiced by millions of people worldwide is directly linked to the pleasure obtained from sexual gratification and alcohol or certain substance consumption. Even though sexual gratification is considered a human necessity from the onset of puberty, the hedonistic views to obtain sexual pleasure from intercourse and other sexual activities have imposed a belief that sexual practices are something that must always be followed and done on a constant basis. These practices have together enticed a several profound effects on young people worldwide, from which as early as they hit puberty, teenagers start to behave erratically to obtain pleasure from sexual activities from which have profound consequences when the aggregated effect takes place. Such consequences are higher teenage pregnancy rates, higher high-school dropout rates, emotionally destroyed teenagers with the responsibility of being already parents and other wide number of effects within the sphere of adolescence and its natural habits from the moment of puberty into adulthood.

Nonetheless, hedonism associated with sexual practices extends beyond teenagers to adults as well. Various documented cases and studies made around the world come to the conclusion that adults are also affected by this sex-crazed driven society and are therefore more likely to commit adultery and be unfaithful to their spouses or current partners. When teenagers are over sexualised the probability of promiscuity increases and thus the ability to bond with one partner for life is reduced. This significantly contributes to family destruction.

Moreover, several studies have shown the reflected impact on the amount of rapes, sexual crimes and paedophilia that have garnered with the onset of internet pornography together with sex addiction, leading to an erratic impact on certain countries with large numbers of mentally unstable individuals.

Alcohol, drugs and other substances that entice relaxation and pleasure are often abused from the same hedonistic views imposed on them from current societal viewpoints. Individuals, especially young people, are often heavily influenced by their peers, with less wisdom, and hedonistic opinions with regards to the heavy and hardcore consumption of alcohol, also known as binge drinking, as well as drugs and certain substances that takes the body and mind to a whole different dimension. This in turn creates mentally unstable individuals who are also prone to keep abusing these substances for the same ideology and influence, leading to the potential destruction of their lives in the long run, broken families and even death.

“The aim of the wise is not to secure pleasure, but to avoid pain.”

While robberies, assaults, armed crimes and other forms of burglary have existed for hundreds of years, these assaults are often increasing with the main objective to commit it to receive some kind of monetary value in return; this can be represented with stealing money from others, committing fraudulent activities, burglary in homes, etc. Certain individuals who are heavily influenced by hedonistic views or addictions are often enticed to commit these crimes in order to obtain money to continue their hedonistic activities, leading to a higher societal impact of robberies, burglary and a broken society as a whole if no controls are imposed.

Another interesting area from which to analyse is the extent to limitations to which each human is personally capable or somehow comfortable to stay at. Many hedonistic individuals will be comfortable with certain achievements in their lives and will object to achieve more due to personal reasons, such as fear, uncertainty, challenges, etc.

Economists and psychologists often regard this limitation in goals as a detriment to economic growth and social development, where a large part of society is comfortable with only hedonistic material goods, but not with achievements relating to recognition, differences in the world, solutions to large-scale problems and other wide set of goals whose benefits are distributed more evenly and not necessarily so individually based and directed such as hedonistic goals.

This view in turn often generates social inequality where followers of hedonism will be comfortable with certain achievements that generate only wealth on a small scale, where other sorts of goals could generate not only wealth at large scales but also a wide number of benefits in the long run for society as a whole. When this particular balance does not intermix, there is very likely that a society will grow with an impact of inequality not just financial-wise, but also in terms of values, respect, dignity and other wide important factors essential to a whole nation, often leading to economic distress and slow economic growth as an indirect result.

Philosophical texts often argue that behind every great, spectacular and amazing thing, there will always be, almost guaranteed, something obscure, cruel and dark behind it, well documented by Lobaczewski (2005). This cannot only be applied to the wealth of individuals at the expense of the poor, but also to the impact that amazing hedonistic activities have at the expense of societal and economic problems within the world. How far can hedonism go from here on to the future with more negative impact on society is a very interesting question that remains unanswered.

Moore, A. (2013). Hedonism. The Stanford Encyclopedia of Philosophy. Retrieved from http://plato.stanford.edu/archives/win2013/entries/hedonism/