The Toxicity of Competitiveness In our present social system, a large percentage of people are driven in order to win. Many people think that being competitive is a natural way to be and something we are born with. This short article looks at competitiveness and how it undermines success at personal and professional levels.

The main aim of a competitive person is to come out best in every part of their life. According to many philosophers and psychologists competitiveness is an inherent biological trait which comes with the human’s urge for survival. It is also a trait common among perfectionists, who tend to be demanding of themselves, and those around them.

Plenty of research has been conducted to study the effects of competitiveness on human life. Doctors say they have found several patients becoming extremely angry due to the irresistible urge for winning everything at any cost that it has become a severe problem in their life. The problem clearly is denoted by neurotic competitiveness, which means patient with such problems suffer from an indiscriminate need to get success at all costs. This problem causes further aggression in their behavior, addressed in the Frustration-Aggression Hypothesis.

Perfectionists develop an obsession to order that eventually alienates those around them. This is known as a paradox of perfection.

One underlying factor to being competitive is a lack of self esteem, which tends to be projected onto others, demonstrating distrust of capacity of others. Another factor is a lack of empathy. These two factors primarily cause lots of stress in personal and professional relationships.

Studies have been conducted in the suburbs in Dallas upon the effect of competitiveness on the mental health of adolescent.  The study highlights two types of competitiveness, one is competing to win and another is competing to excel. Competing to win applies when a person wants to control and outperform others. While competing to excel signifies when a person wants to perform well and outshine the personal targets that he had set for himself. The study reveals that students who always compete to win are suffering from severe frustration, social isolation, and stressed relationships.  But at the same time the students who are competing to excel, has been proven to be advantageous for their well-being.

The fundamental duty of the education system is to encourage students in excelling their performance rather than chasing only for success. In the present educational scenario many parents are concerned about competition at school levels and it is having a bad effect on their children.

Though moderate competition is good for the students, but excessive competition can spoil the mental health of a child. Since children are not born with an innate competitive desire, they learn everything gradually. Over competitiveness causes physical or emotional damage, or both. Sometimes it causes a negative effect on the mind of the child if he fails to succeed. Parents should also understand that winning at any cost makes them stressed and they can suffer from low self esteem and fear from social humiliation.

Alfie Kohn, who has written enumerable articles on education and parenting, has criticized this type of human behavior that is leading our younger generation into utter devastation.  According to Kohn, competition undermines character, produces inferior results, and fortifies a notion that we are only successful when we have defeated other people. One man’s loss, other man’s gain scenario. This tends to generate a perpetual state of disease and anxiety.

Kohn recommends that people should put more emphasis on teamwork instead of competitiveness, because this is the most effective method to produce real superiority. In this type of system people feel more encouraged to work in groups as a team and help each other to grow.

This article appears in Miscellany of Topics 1 ebook, click here for more. 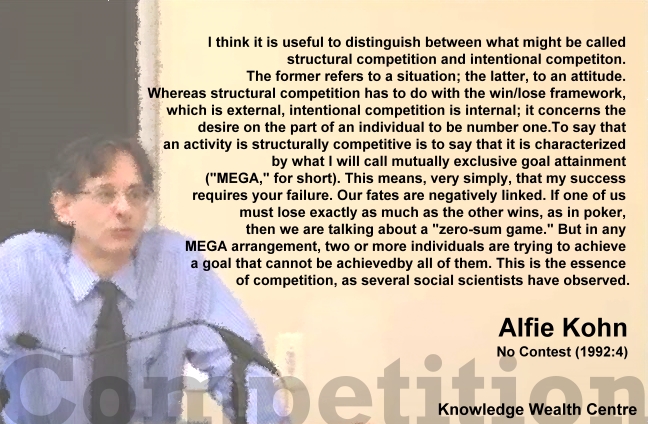