It was interesting to come across a recent speech by Mr. Nigel Farage on ‘Freedom and Democracy’ at the European Parliament on the 24/11/10, which raises many important issues about some of the mentalities leading various institutions.

Mr Farage’s reference to the obsession or the fanaticism among political representatives should be an area of great concern. What motivates  individuals in power to implement systems with the capacity to produce ‘economical’ or ‘physical’ genocide across the world and use any means to achieve their objectives? Is it the lack of empathy? A superiority complex or ignorance? 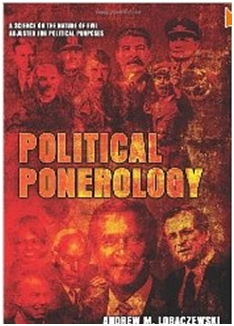 According to Dr. Andrew Lobaczewski’s and his book ‘Political Ponerology, six (6) percent of the population seem to carry the genes responsible for biological evil or who acquire a pathological mentality in their lifetime. These mentalities when in positions of power create a phenomena called pathocracy, from Greek pathos means “a feeling, pain, suffering” and kratos, means “rule”. Pathocracy is a form of a totalitarian government created by a small pathological mentality minority that takes control over a society or group of normal people. It has various forms, but it usually tends to attach itself to any fair system under the disguise of a democracy and pretends to offer a solution or improvement. With time, these systems eventually get corrupted and perverted carrying little resemblance of the original idea or objective. Here are some of the characteristics of pathocracy:

The true nature of a pathological mentality is conscienceless, emotionless, selfish, cold and calculating and absent of any moral or ethical standards who enjoy to climb the ranks of social hierarchies. Therefore in a pathocracy dominated by pathological values, policy makers or CEOs of big business promote a culture of greed and selfishness as the norm.  These mentalities shape the common culture and morality for the rest of the population. It affects the way we think, how we judge what is going on in our lives and what is right or wrong. As a consequence many individuals who are not genetic psychopaths become secondary sociopaths to simply survive or succeed in this system. They see that their leaders lie and cheat, and they figure that if they want to get ahead, then they can lie and cheat as well.

The ability to experience empathy is crucial in all human relationships, and the lack of empathy is found in apathy. Professor Carroll Quigley in his book ‘Tragedy and  Hope‘ has stated:

´…the apathy and indifference of people in the Western World to the suffering, torture, misery, bondage and death of millions and millions of people around the world in the years ahead may be one of the greatest tragedies of the twenty first century´.

Without empathy there is no basis for trust, and it demonstrates that one side simply cannot see the humanity, experience and feelings of others. It shows a lack of human concern and this is what creates human misery, deviancy, genocide and crime.

People cannot commit acts of evil when they feel empathetic, as empathy acts a safety switch before deviant acts are carried out. In fact if every single person in the world was capable of feeling totally empathetic, there would be no war and no crime in the world. This should be taught at schools so that future generations are able to develop their empathy centers of the brain and become indignant when acts of pathological behavior occur.

The Roots of Violence: Wealth without work, Pleasure without conscience, Knowledge without character, Commerce without morality, Science without humanity, Worship without sacrifice,
Politics without principles.